Using our urethane color scheme system, DollShe craft manages a standardized color scheme data for each skin tone to minimize color variation. There is hardly any visible color variation between the head and body of all reproduced dolls, thereby making individual parts interchangeable. 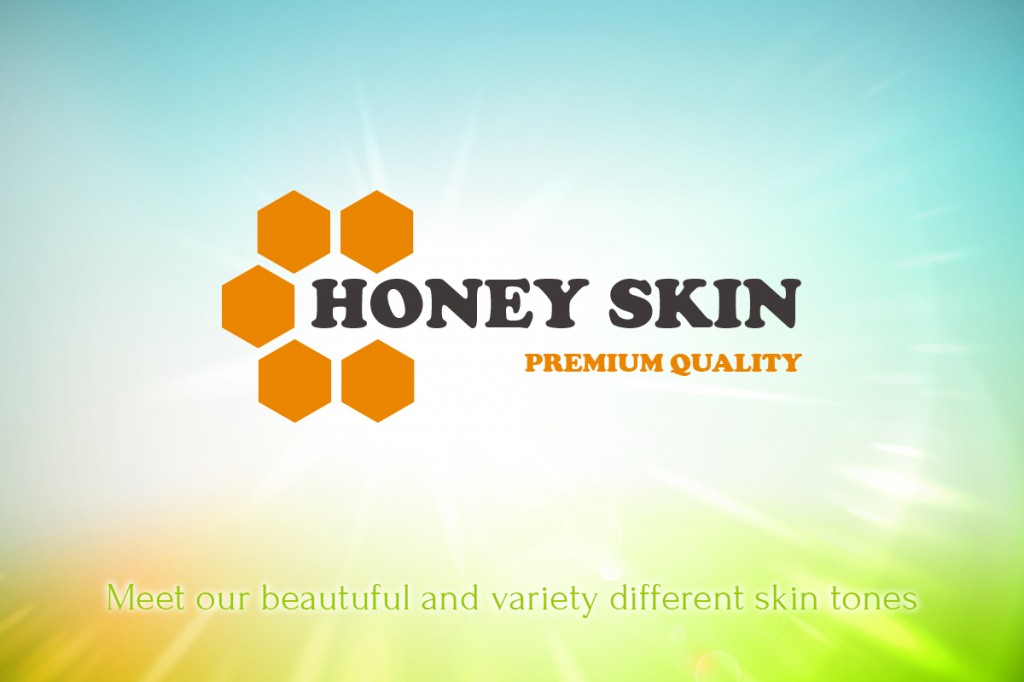 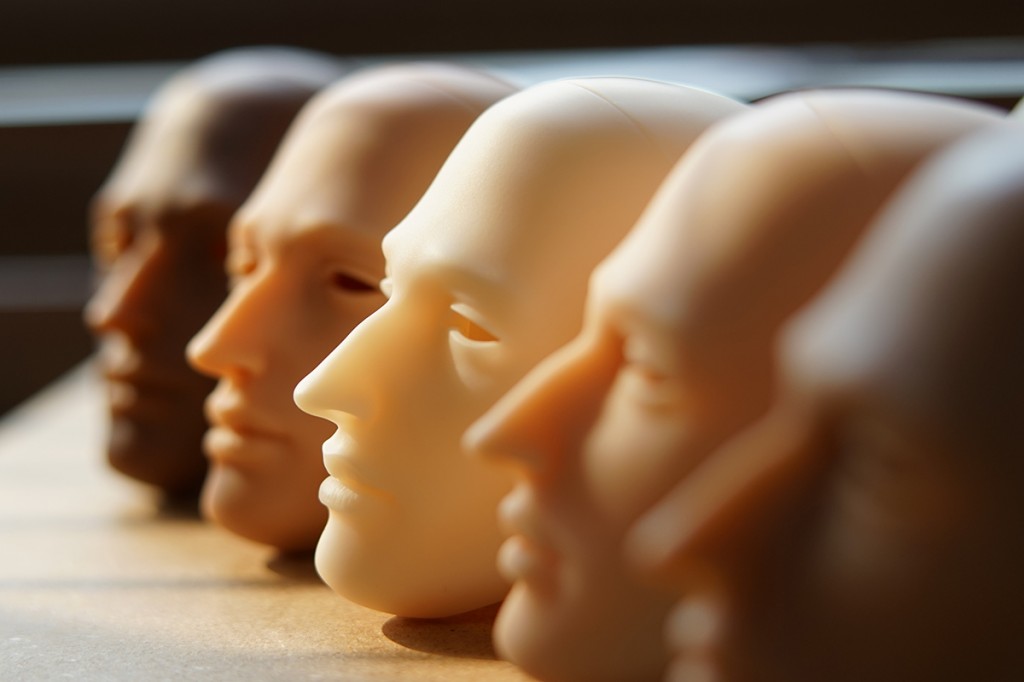 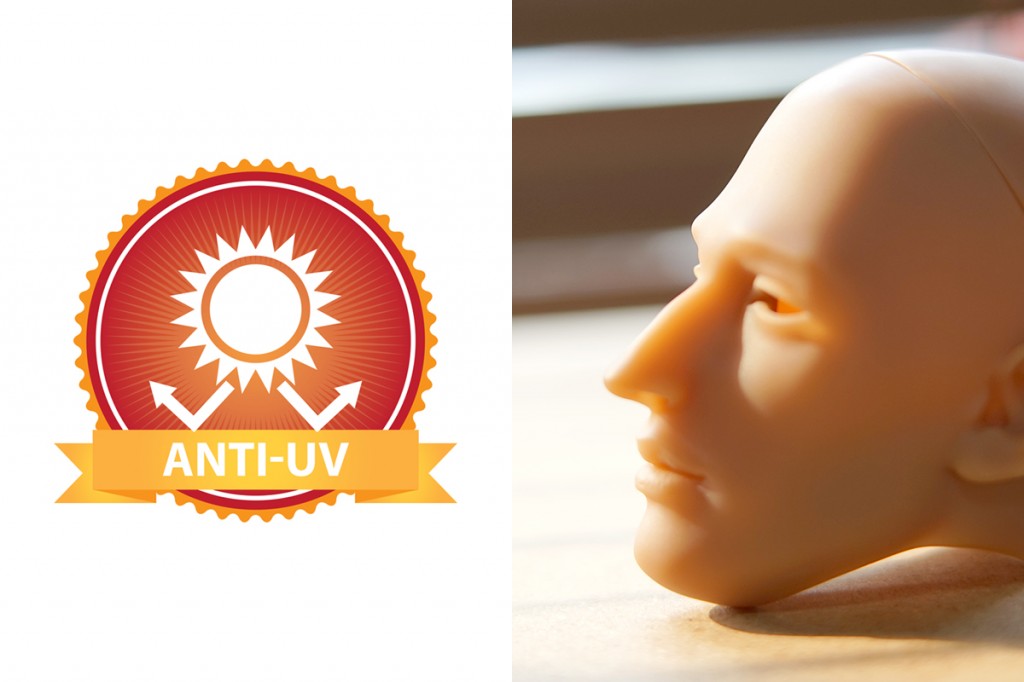 Although perfectly blocking
UV rays to ultra-low viscosity polyurethane is not possible, but with ‘Sun Devil’ from a company called ‘Smooth-On’, UV rays can staunchly be blocked to allow slowing the process of color change in skin tone which occurs from intrusion of UV rays. Protect your beloved dolls from sunlight.

* Currently, we are experimenting both Honey Skin and normal skin in direct sunlight for long period of time. The experiment detail will be released later. Yellowing-effect experiment has been ongoing for about a month now, and we have determined that it is not enough. So we’re extending it to three months by exposing to direct sunlight and outside air. The result after about a month has been relatively small in terms of color change. There is less yellowing-effect in indirect lighting. However, if it is exposed to direct light, even with UV blocker additives, yellowing-effect cannot be completely blocked. If you wish to keep its original color, avoid exposing in direct light for a long period of time. 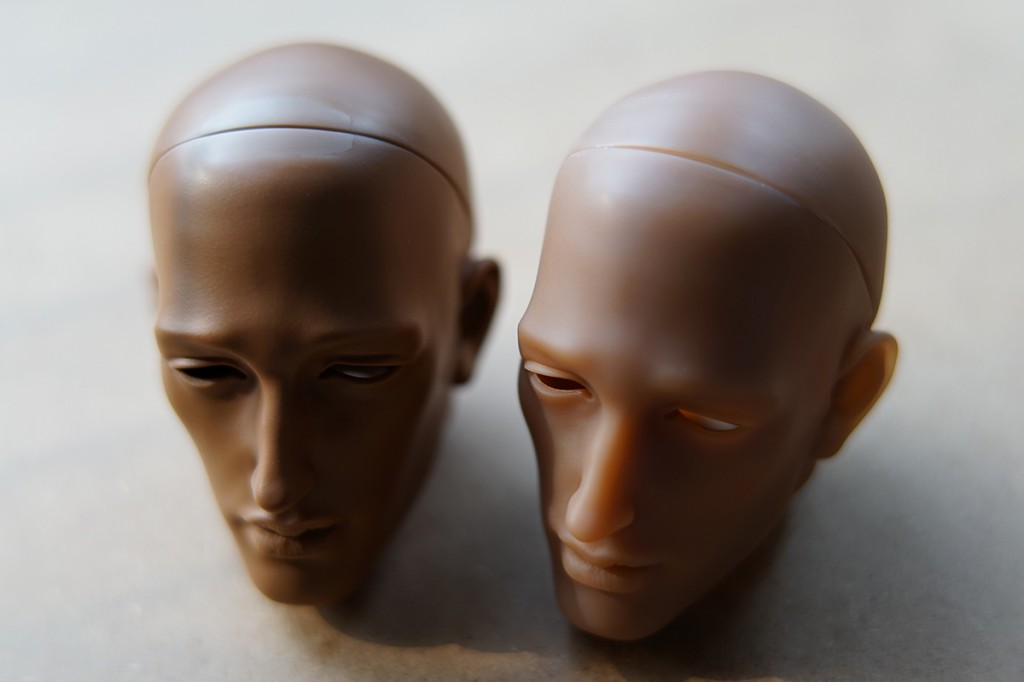 * One on left is normal skin and the right is Honey Skin. After removing the gate from crown of the head, look at the sanding part. Excluding difference in texture, Honey Skin has almost no difference in color after sanding.

Degree of elasticity and toughness is tremendous. It is harder and absorbs more impacts.

It has minimal contraction so that it can achieve high similitude to the original sculpt after casting.

With the right amount of ratio between Korean resin and resin from U.S. company, ‘Smooth-On’, the newly released resin is assorted with best of both resins. In Honey Skin, French resin, which is vulnerable to yellowing-effect from sunlight, is not included. Already in 2006, we have chosen not to use French resin due to its shortcomings and its vulnerability to yellowing effect and low elasticity, thus, fragile.

Korean resin could last up to four cycles of casting, but Honey Skin’s resin can only cast one doll at a time. Stiffening period is long and it must go through the process of high temperature baking. The raw material is three times more expansive and production ratio is reduced to four to one, but to make beautiful dolls, luxurious materials were selected.

With skillful experts and trained teamwork, we DollShe craft thrives to make beautiful dolls, starting from the scratch and only acceptable dolls are created. After long hours of experiment, we are proud to present our transparently clear Honey Skin. We are making one more step by having upscale material.

With skillful experts and trained teamwork, we DollShe craft thrives to make beautiful dolls, starting from the scratch and only acceptable dolls are created. After long hours of experiment, we are proud to present our transparently clear Honey Skin. We are making one more step by having upscale material.

* Honey Skin contains resin, which is made of plants that have viscous liquid; thus, it is very hard to remove all the bubbles from the products. We will not confirm as defective if we cannot distinguish bubbles by looking at it. (Tiny bubbles on the products are not considered as defective.)
* Honey Skin’s surface bulk, volume and texture will be somewhat different when penetrating light.
* Discoloration from yellowing-effect cannot be stopped. Due the material of doll’s nature, please avoid direct light as it might quicken the yellowing-effect process. The test results show that Honey Skin is less vulnerable than a Pure Skin. Yellowing-effect cannot be stopped if it is exposed to direct light for longer duration. * Do not remove the parting lines on normal skin such as copper oriental, pale tan, tan, and ebony dolls, as it will lead to discoloration.
* Discoloration from yellowing-effect cannot be stopped. Due the material of doll’s nature, please avoid direct light as it might quicken the yellowing-effect process.